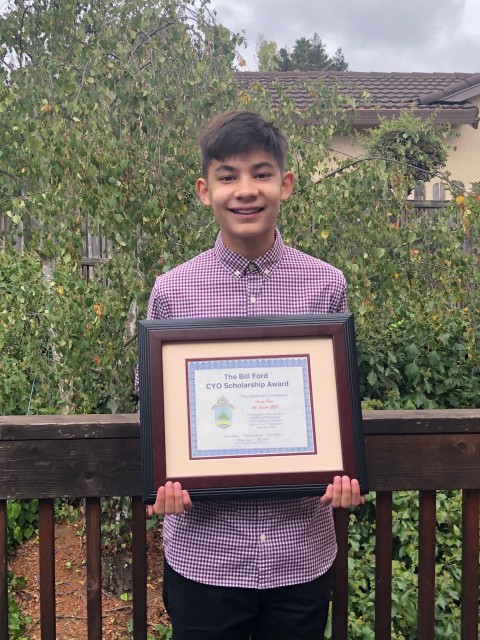 Both Catholic school and public school students are encouraged to apply. At least one scholarship will be awarded to a current student in a Catholic Elementary School who will be attending a Catholic High School next fall. The scholarships are funded by an anonymous donor, and is named in honor of longtime CYO Directorr, Bill Ford..

The scholarships are not awarded on the basis of skill in sports, but on the candidate’s participation in CYO, in understanding of good sportsmanship and by exhibiting the
Gospel values that are the essence of CYO participation.

All Saints CYO is pleased to announce that one of the 2020 award receipients is none other than All Saints graduating 8th grader Avery Pace. Avery was among the three final award winners from St. Bede and St. Elizabeth respectively. The three final award recipients were chosen from a group of five finalists which were whittled down from an original applicant pool of 60 then 30. The five finalists were the interviewed by the scholarship committee, and then the final three were chosen by the same committee. Avery has been an active participant in All Saints CYO since the 1st grade and has partciipated in every sport that was available, including basketball, cross country, track & field,and sand volleyball.

All Saints CYO would also like to recognize the efforts of graduating 8th grader Ethan Alcayde, who along with Avery made it to the final five applicants. We are very proud of his accomplishment of being one of the final five. Even though  he was not one of the final three award recipients, Ethan exemplified what CYO stands for with his enthusiasm and positive attitude.

Congratulations to both Avery and Ethan!